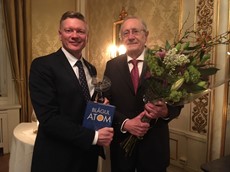 The Swedish Nuclear Society (SKS) Honorary Price 2020 is awarded to Mr. Bengt Pershagen for his pioneering work that has contributed greatly to the development of Swedish nuclear energy. Bengt has a fantastic scientific career that spans more 60 active years in the service of Swedish nuclear power development. Bengt graduated from engineering physics at KTH in 1948. His first employment was at AB Atomenergi where he worked closely with Sigvard Eklund, among other pioneers. Bengt was part of the team that designed the first Swedish nuclear reactor R1 at KTH and attended its first criticality on the 13 july 1954. This was the beginning of the Swedish nuclear era that later on culminated in the successful deployment of 12 commercial reactors and had the positive effect of deep de-carbonization of the Swedish electric system. Bengt was closely involved with the development of the Ågesta pressurized heavy-water reactor and the Marviken boiling water reactor. Bengt has written hundreds of technical and scientific papers and authored two textbooks on the subjects “light water reactor safety” and “fast breeder reactors” and two historical books describing the development of nuclear energy in Sweden “Nuclear Energy 50 years” and “Blue and yellow Atom” which was published as late as 2017. Needless to say, Bengt is a man of great experience and a true pioneer in the history of Swedish nuclear development.”

Bengt Pershagen's presentation from the ceremony can be found here.